Orocobre’s Rapid Expansion Plans In Japan And The Puna Plateau

In recent weeks Orocobre (OTCPK:OROCF) has provided several updates to the market regarding both the short-term and mid-term strategy which look very positive. The company has outlined several keys points regarding cash flow, lithium production expansion and new ventures in Japan. The company has confirmed that future capital requirements will come from cash flow and joint venture debt rather than printing additional common shares. It is in my opinion, that on the back of these exceptional positive updates, shares in the company represent good upside exposure at C$3.00/share.

Leading the Pact in the Puna Plateau

For a number of years, Orocobre along with a number of other junior explores have been aggressively investing in the Puna Plateau with the hopes to become the next lithium producers. The Puna Plateau is an area of the Andrean Mountains that reaches elevations of 4,000m and spans 1,800km across Argentina, Bolivia, and Chile. It houses the largest proven deposit of lithium, referred to as the “The Lithium Triangle,” and consists of three major salt lakes: Salar de Atacama, Salar de Uyuni, and Salar de Hombre Muerto. The Puna Plateau is referred to as the “Saudi Arabia of lithium” as it holds approximately 70% of the global reserves, making it an attractive area for both junior exploration and large mining companies. However, despite the favorable mineral structure and capital being spent, Orocobre has been the only player to bring new meaningful production capacity to the global arena.

Project Up and Downs

In December 2014, Orocobre announced the official opening ceremony of the Olaroz Lithium Project, which is still amongst one of the few operating lithium brines in the world. Orocobre’s project partner Toyota Tsusho (OTC:TYHOY) has the exclusive off-take arrangements for all the lithium carbonate produced at the Olaroz Project. The project has hit several hard barriers including: currency issues, developing a relationship with the national and regional governments in Argentina, working at very high altitudes, bring all forms of capital into a socialist regime, along with numerous technical and production issues. Since 2013, these challenges have sent the stock and investor emotions on a wild rollercoaster ride.

Lithium – the next fuel:

Power Up With Shares In Orocobre – Buy Recommendation Reiterated

Over the past 4 years, one of my efforts has been on educating the investment community on the importance of the lithium production market. In fact, my first publication with Seeking Alpha in 2013 was on Argentina’s emerging lithium market (see: Argentina – Home to Emerging Lithium Producers). Since then, I have narrowed down my focus on Australia based, Orocobre Limited (OTCPK:OROCF) which has successfully brought to market the Olaroz project in conjunction with project partner, Toyota Tsusho (OTC:TYHOF) (OTC:TYHOY). Olaroz is the first “greenfield” lithium brine project to commence production in several decades). Today, in light of a recent pullback in Orocobre’s share price, I am reiterating a strong buy recommendation with further accumulation on additional share price volatility.

Today, lithium-based batteries are now in demand more so than ever due to a growing number of product applications and an increase in battery consumption per application. The commercial foundation of lithium batteries began in the early 1990’s when Sony released its lineup of handheld video recorders. Since then, the mobile phone revolution changed the dynamics for the lithium battery space which was further propelled in more recent years by the widespread adoption of various other consumer handheld devices including: tablet PCs., laptops, power tools, and smartphones. Another notable trend within the space has been the shift towards Original Equipment Manufacturers (OEM) integration of lithium batteries. It is now common to purchase digital cameras and computer accessories which already have lithium batteries integrated as it allows for various design, safety and cost advantages to OEMs while improving the consumer experience.

Investing In The Lithium Oligopoly

Since Sony Corp. (NYSE:SNE) launched their lithium ion battery in the early 1990s the world has been moving towards an increasingly mobile society where consumer electronics have dominated the retail and consumer markets. Everything from laptops, tablet PCs, mobile and smart phone, consumer gadgets and digital cameras have all benefited from the rapid advancements in the lithium ion battery.

Demand for lithium is taking flight

Today, lithium ion batteries are now in demand more so than ever due to an increase in the number of consumer products that are being sold. For example, low cost mobile phones are being widely deployed in third world and developing parts of the world. Next, the numbers of product applications which utilize lithium ion batteries are increasing and several emerging products are demanding more lithium per unit sold. A mobile phone requires a small amount of lithium carbonate while an electric vehicle requires a significant amount of the white metal. In addition to electric vehicles, automotive manufacturers are rolling out various hybrids and plug in hybrid vehicles. Stationary energy storage systems are also gaining significant traction, primarily in mature solar PV markets such as Hawaii, Germany, California, and Japan. As the cost of solar PV plus battery systems fall and electricity rates increase the economic model for these types of stationary storage systems become more feasible without government incentive.

In addition to solar PV self consumption markets there are a number of other applications that are consuming lithium ion batteries such as frequency regulation, battery backup and demand charge management amongst others. A paradigm shift is taking place regarding how the world produces, stores and distributes energy as the cost to produce solar PV has fallen below the cost to procure electricity from grid providers in select regions of the world.

Lithium has been one of the cornerstones of success for the mobile phone, smartphone, laptop, and tablet PC markets over the past decade. Lithium batteries for consumer electronics is an area that has seen significant growth due to population increase, increase in buying power in developing countries, and price decrease in electronics. Lithium ion batteries are at the core of many consumer electronic devices for their ability to withstand memory effects, slow discharge when in standby, safety features, and high energy density. The true tipping point for lithium-based batteries will be found with the widespread adaption of hybrid, plug-in-hybrid and full-electric vehicles, coupled with the growing need for utility-scale, grid-tied energy storage.

Asian manufacturers, which have traditionally dominated the global market for lithium ion batteries covering a variety of electronic categories, are leading the next wave of investment into production capacity. With production capacity comes the need for lithium carbonate equivalent (LCE), which is the raw material input for lithium ion batteries. Demand for LCE will grow from 129,000T in 2011 to 498,000T in 2025. The following graph illustrates the growth of lithium batteries with relation to lithium carbonate: 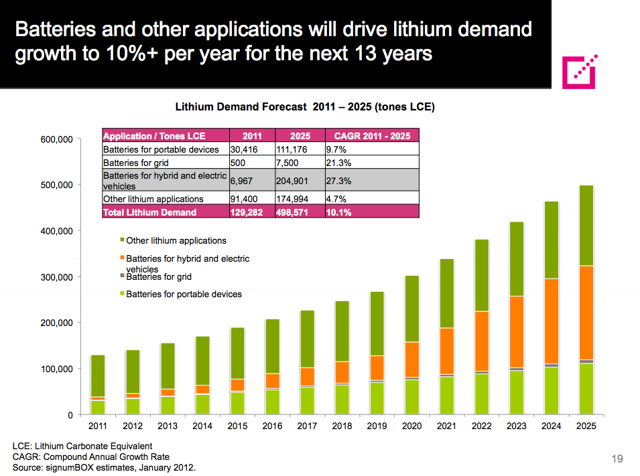 Lithium supply security has become a top priority for Asian technology and manufacturing companies. Strategic alliances, joint ventures, joint ventures and acquisitions, continue to be established with lithium exploration companies worldwide. This will ensure a reliable and diversified supply of lithium for Asia’s battery suppliers and vehicle manufacturers. With lithium carbonate being one of the lowest cost components of a lithium-ion battery, the issue that Asian companies are addressing supply security attained which can be achieved by acquiring lithium from various lithium producers. These measures have been ongoing since 2009 which has seen Asian companies establish joint venture and acquire existing producers. These strategic moves have allowed battery and vehicle companies to alleviate the possibility of future lithium supply disruptions, which could have devastating consequences in a well-established and productive HEV, PHEV, and EV industry. Consider that both Korea and Japan, who are amongst the largest producers of lithium ion batteries have no lithium hard rock or salar brine deposits within their borders.

With the volatile global markets and gloomy headlines, it is easy to lose track of the strong underlying fundamentals at play in the lithium sector. Unlike many other established commodities that have mature but cyclical end markets the use of lithium as more than a niche commodity is an emerging phenomenon. While demand has not been completely immune to macro economic trends, it has been rather resilient. Lithium demand has doubled over the past decade and is expected to double over again by 2020. What is primarily driving demand currently is the rapid adaption of Lithium Ion batteries in everyday consumer and hardware applications along with the uptake in new applications such as stationary energy storage and the widespread uptake of hybrid and electric vehicles such as those produced by Tesla Motors (TSLA). On the heels of these trends, there have been a flood of new investments, acquisitions, mergers, and price increases within the lithium production industry.

The top lithium producers, which are an oligopoly in the market have recently further consolidated the industry. This was accomplished in 2012 when Chinese lithium-giant Chengdu Tianqi acquired 100% of Talison Lithium Ltd., which owns and operates the Greenbushes hard-rock spodumene mine in Australia. The deal was an all cash transaction valued at $850 million. In 2013, Rockwood Holdings Inc. said that it would acquire a 49% stake in Talison from Chengdu. Collectively, today the lithium oligopoly accounts for almost 95 percent of global lithium supply including Soc. Quimica & Minera de Chile SA (NYSE:SQM), Rockwood Holdings Inc. (NYSE:ROC) and FMC Corp. (NYSE:FMC).

Focus On The Puna Plateau – ‘Saudi Arabia Of Lithium’

The Puna Plateau is an area of the Andrean Mountains that reaches elevations of 4,000m and spans 1,800km across Argentina, Bolivia, and Chile. It houses the largest proven deposit of lithium, referred to as the “The Lithium Triangle,” and consists of three major salt lakes: Salar de Atacama, Salar de Uyuni, and Salar de Hombre Muerto. The Puna Plateau is referred to as the “Saudi Arabia of lithium” as it holds approximately 70% of the global reserves, making it an attractive area for both junior exploration and large mining companies.

‘Brine’ is water saturated with a high concentration of salts such as that found in salt lakes, or a salar. Concentrated brine water is extracted from below the Earth’s surface and cycled through a pond evaporation process, which can take from 12-24 months; as the brine water begins to evaporate, lithium and other by-products are harvested, including potassium and boron.

In the 1990s, a large investment of approximately $150million by an American chemical company spurred interest in the Puna Plateau. In recent years, a significant number of junior exploration and mining companies have flocked to this part of the globe to unlock further value as the demand for lithium has doubled over the past decade and is expected to double again by 2020. The increase in demand comes from the rapid adoption of lithium ion batteries to a wide range of mobile applications such as cell phones, laptops, and power tools, but also its use in new and emerging applications like table PCs, smartphones, and electric vehicles.

The largest deposit sits in Bolivia, a country that has decided to develop the salars with little external support. But in late 2011, the Chinese state company CITIC Guoan Group Corp announced that it had reached an agreement to begin exploration in the Salar de Coipasa. Later in 2012, a consortium of South Korean firms announced that they would build a pilot plant to manufacture lithium cathodes, the main component in lithium ion batteries. Major South Korean electronics firms, such as LG (NYSE:LPL), have indicated that they are seeking to be the number one producer of lithium ion batteries in the coming years. Industry watchers, however, have seriously criticized the Bolivian government for making such slow progress on the project. It is even doubtful that these projects will see life in the coming years as the immediate future sees supply being brought in from Argentina and Chile.